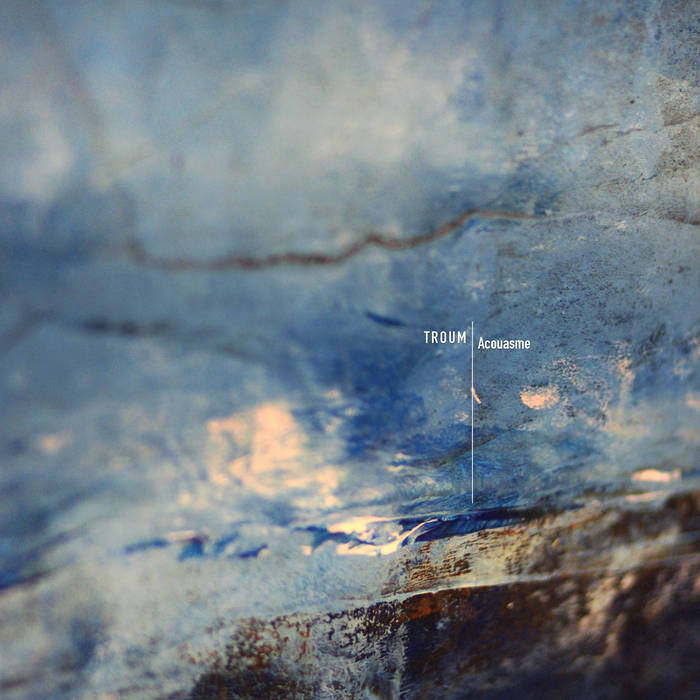 Robin Pender This music is glorious

‘Acouasm’ is a psychiatric notion for unshaped, non-verbal aural deceptions, amorph and elemental sounds and noises, such as hissing, ringing, scraping, only perceived but never actually present. The seven long tracks of pestering transrational drones on ‘Acouasme’ are like aural psychiatric symptoms, humming hallucinations leaving the stable reality. The introspective and brooding atmospheres and industrial-tinted tapestry become a feverish dream, through a deranged perception.

It’s still Troum, though, meaning that the fever also breaks, returns and breaks again, pushing you back and forth between delerium and a peaceful mind. ‘Cast Iron Ark’, the added new track from the ‘Acouasme’ sessions, especially fits in nicely with its monumental grandeur and washes of drowned-out ghostly voices.

The album has been remastered and cut by Frederic Alstadt (Ångström Studios) and pressed on 180gr white vinyl 2LP, limited to 300 copies.

“‘Acouasme’ sets you deep into a world of strange and eerie aural occurences... “At the end of ‘Acouasme’, I can only walk away stating that I have experienced something that I do not fully understand as of yet.” [Brutal Resonance]

Everything recorded & mixed endlessly by TROUM through the years 2007 - 2015

Mastered and cut by Frederic Alstadt at Ångström Mastering, Brussels

Thanks to: Ingo Schulz & Jens Hagen for backing sounds on ‘Signe du Miroir’